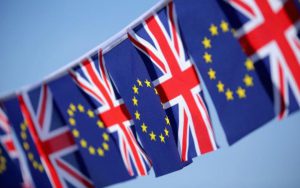 My advice on the differing views emanating from interested parties (Vote Leave, Remain, Bank of England, IMF, ECB etc.) on the likely effect on UK economic and individual prosperity, as we approach voting day is – believe no-one! Unfortunately, both sides of the â€˜Brexitâ€™ debate have stretched their credibility more than a little with â€˜factsâ€™ which are based on so many assumptions as to render them of little or no use.

Whilst the long term economic effects of a Brexit (and therefore the effect on us as individuals) are impossible to accurately predict â€“ dependent as they are on the outcome of trade deal negotiations, which will be several (at least) years down the line – there are some effects that are more than likely when it comes to investment markets.

One â€˜factâ€™ on which you can rely is that investment markets hate uncertainty. Unless polls show a clear â€˜stayâ€™ majority as we run into the vote, it is likely that the UK stockmarket and sterling will both be negatively affected. We have already seen some volatility in both over the last few weeks and a vote to leave on 23rd June is likely to see this continue. Why? Well, no-one has ever left the Eurozone before (although several have come close to being thrown out!) so we would be in unchartered territory.

How long would any negativity last? Another unknown I am afraid, but it must be remembered that investors are used to dealing with uncertainty, whether it is over the result of an election (the prospect of Donald Trump as leader of the free world might be just as concerning for markets), global economic growth, terrorist activity or war.

If weakness in sterling does persist beyond the first few weeks following a leave vote it will be good news for the nationâ€™s big exporters (some of the UKs leading listed companies) who will gain a competitive pricing advantage. I would caveat this though by saying that how sterling will trade relative to the euro after a Brexit vote is more difficult to predict, as the Eurozone itself will become an area of uncertainty, having â€˜carelesslyâ€™ lost a member. Markets will no doubt speculate on whether there will be more of a rush to the exit.

In this scenario, imports would, of course, become more expensive which could drive up inflation and therefore subsequently interest rates. This would come as a big relief to the nationâ€™s savers currently struggling with close to zero deposit interest rates, but could spell disaster for some over-indebted households!

So what do you do with your investment portfolio? The answer is to diversify; make sure it has a spread of different assets and get professional advice. On which note, Cave & Sons investment management team, with its 110 years of experience, can be contacted on 01604 621421.