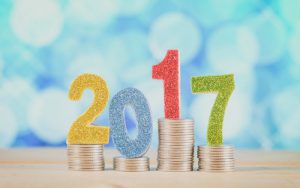 With the year of political astonishments now behind us, investors are attempting to identify the potential pitfalls financial markets may encounter over the next twelve months.

Although we are likely to better understand the ramifications from both the EU referendum and Trump presidency as 2017 unfolds, it will undoubtedly take considerably longer to properly appreciate just how these electoral decisions will have reshaped the geopolitical landscape. If Theresa Mayâ€™s March deadline for triggering Article 50 is adhered to, we should soon know whether markets are up against a â€˜softâ€™ or â€˜hardâ€™ Brexit, the latter of which is considered to have much more potential for disruption. Across the Atlantic, the extent to which President Trump delivers on his fiscal stimulus and regulatory reversal promises is likely to dictate where markets move from their already-elevated levels.

There is some concern that the rise of the anti-establishment vote may carry across the continent, with 41% of EU GDP coming from countries holding pivotal elections this year; including France, Germany and The Netherlands. The biggest concern, and perhaps one of the biggest hazards of 2017, is the eventual break-up of the Euro, particularly with the likes of Marine Le Penâ€™s far right movement hoping to pull their country out of the Eurozone. In addition to this, a fractured economy, bond market, banking system and, not forgetting (!), Greece, are all complexities that could further contribute to the 19-nation blocâ€™s demise.

Elsewhere, the credit binge in China has seen outstanding debt rocket to 255% of GDP, increasing the risk of a banking crisis, whilst any oil price related shocks or higher interest rates could hinder the recent progress made across emerging markets. Meanwhile, in Japan stock markets could prove fragile having raced ahead primarily on Yen weakness.

With all that said, and to channel Donald Rumsfeld, it is the â€˜unknown unknownsâ€™ that often catch investors horribly offside, particularly when markets are trading towards all-time highs.

Anecdotally, years ending in â€˜7â€™ have not been kind to investors; 1987 saw the â€˜Black Mondayâ€™ market crash, in 1997 there was the Asian Financial Crisis, and in 2007â€¦well, we all know what happened then, and are still living the consequences of it.

Despite all that, UK economic growth continues to exceed expectations and recent currency weakness will certainly be helping domestic companies with a focus on exports. And, whilst cash returns remain so low, it is likely that positive cash flows will continue to provide investment markets with some support.

Should you wish to discuss any of the above commentary in further detail, or would like to discuss your investment strategy in general, then please contact our investment management team on 01604 621421.