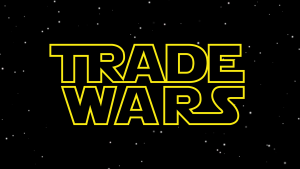 A long time (21 months) ago in a galaxy far, far away (the United States), the electorate chose property mogul and TV personality Mr Donald J Trump to be their 45th President. After failing to deliver on a number of his pre-election promises, he did manage to overhaul the US tax system last year. This year, his endeavours have mostly centred on global trade, and more specifically, addressing his country’s $375bn a year trade deficit with China.

Kicking off in July, the first round of tit-for-tat tariffs have so far affected $34bn of a scheduled $50bn worth of trade (or roughly 0.3% of both US and Chinese GDP) and have been dismissed as inconsequential at this level. However, it is feared that the US administration’s planned additional tariffs of either 10% or 25% (both have been referenced) on a further $200bn of Chinese imports and Beijing’s anticipated retaliation could become significant headwinds to global economic growth and will hurt consumers worldwide as companies are forced to offset greater operational costs with higher prices.

Though fundamentals have been supportive across equity markets (strong earnings growth, firm US jobs figures, improving Eurozone data), recent market strength would suggest investors do not appear to be fully pricing in the increased risks from the proposed escalation in tariffs. Should tariffs become sufficiently widespread, supply chains will inevitably be disrupted and the likelihood of finding substitutes could diminish. Furthermore, whilst the US economy isn’t particularly dependent on Chinese demand, China may look to alternative ‘non-tariff’ measures to antagonise, such as weakening its currency (an accusation already made by the President), selling US Treasuries or even imposing additional bureaucracy to complicate dealings for US companies.

Analysts at investment bank UBS have warned that if the disputes escalate into full blown ‘trade wars’ global GDP could decelerate by 108 basis points, developed global equity markets could sell off by as much as 20% and oil prices could sink back to below $50 a barrel. However, it is worth noting that these tariffs may not ultimately get implemented and, as they are self-imposed, can be quickly reversed in the event of such economic downsides.

The last 18 months have taught us that trying to second guess the Trump administration is not a conducive approach to investment management. We would suggest that through staying invested, not taking excessive risks and holding a diversified blend of assets is the most appropriate way investors can position their portfolios for growth in such potentially hazardous times. If you would like to discuss your current investment strategy with one of our advisers, please do not hesitate to call us on 01604 621421.